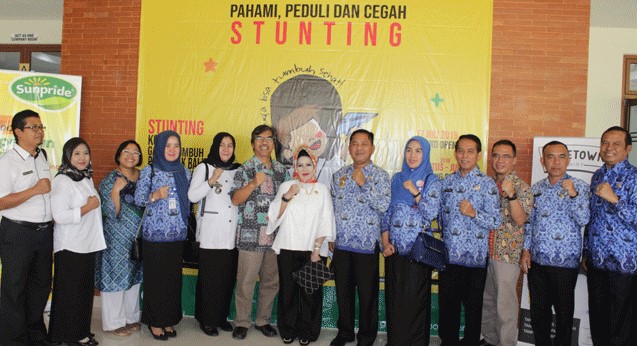 The grand opening was marked by the beating of the gong by the Assistant II of the Lamteng District Government for Economic and Development Yunizar witnessed by the Head of Research and Development of Health Service Resources, Ministry of Health Irmansyah, Head of Lampung Provincial Health Office Reihana, and GGF Senior Manager Sustainability Arief Fatullah.

In his speech, Arief Fatulah explained why the issue of stunting was the concern of the GGF? According to him, in fact stunting cases occur a lot in the working area of GGF. While we produce products that are a source of nutrition, such as milk, fruit and vegetables.

“Through GGF products, we encourage Indonesian people to live healthier, healthier and better. And with the Great Indonesia program, GGF will provide socialization and assistance in stunting prevention to residents in 5 villages with the highest stunting cases, “said Arief Fatullah.

“This will be an annual program and will be sustainable. Currently GGF is focused in Central Lampung, in the future this program will be increased at the provincial level, up to the national level, “Arief said.

All parties must also be involved, concerned about this case. We will also encourage the involvement of all parties so that all communities can behave in a healthy life, he continued.

“We express our gratitude for the concern of GGF who took part and became a pioneer of companies in Central Lampung who care about the problem of stunting. This is according to the target of the Central Lampung Regency Government, 2023 must be free of stunting, “he said.

From the results of the data collection, said Yunizar, from 279 toddlers who experienced malnutrition 4.9 percent. “As many as 276 thousand of our toddlers census, under weight or malnutrition 4.9 percent. Then stunting treatment in central Lampung was 6.68% higher than the national prevention program. So we spread the stunting focus from 10 to 30 villages, “he said.

The Head of Lampung Provincial Health Office Reihana appreciated the GGF’s social responsibility program, he hoped the involvement of the private sector could reduce the stunting rate by 19% in accordance with the Lampung Provincial Medium-Term Development Plan.

“I hope that all companies can be moved, nutrition problems cannot be done by the Health Office alone. “It must be sustained across sectors, so that health problems are finished,” he said.

In 2030 Lampung will enjoy a demographic bonus where the majority of the population is productive. Reihana hopes that the generation to be welcomed by Lampung is a healthy generation.

“Do not let the next generation be a generation that is sickly. We must work hard so that it doesn’t happen. Thanks to GGF, I hope this step will be followed by other companies in Lampung, “he said.

According to the Head of Research Center and Developer of Health Service Resources, Ministry of Health, Irmansyah, this condition is quite sad, considering Central Lampung is known as a national food barn.

“It turns out that even though it is in a food barn, if the environment is not healthy and clean, the risk is still there,” said Irwansyah.

Irwansyah asserted, stunting cannot be cured, the only effort can be done through prevention. However, prevention efforts by the government so far have only been able to alleviate 30% of existing health problems. For this reason, synergy with the private sector is needed.

“There is not much private involvement in the issue of stunting, we encourage it, because how the government budget will always be lacking. The involvement of the private sector, we believe, will provide a large contribution to the stunting rate, “he said.